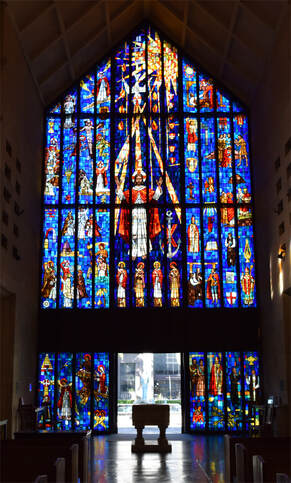 Except for the over-sized bronze doors, the entire west end of the Cathedral is curtained with a brilliant wall of intricately patterned, hand-blown stained glass by the John Wallis, of the Wallis-Wiley Studio (California). Built with bronze-clad stainless steel vertical and horizontal supports, the window was one of the largest constructed in the late 1950’s in the United States. The Great West Window is divided into three principal areas:

The Cathedral’s West Window has such grand scale and engaging images that visitors sometimes don’t notice, at first, the many other works of sacred art. But those artworks and their dedications tell stories that are perennially moving.

Above the High Altar, the central window represents t. Andrew flanked by St. Peter and St. Paul.  At the same level are a series of narrow clerestory windows. In 1958, they were provided with the simple but colorful seas of someof the dioceses of the Church.

On the Ewa or north side, is desplayed the seal of the Diocese of York.  On the Diamond Head or south side, there is a full range of seven windows containing the seals of other dioceses: Canterbury, Wales, Scotland represented by Argyle and the Isles, and North Ireland or Armagh.  Also included are some dioceses bordering on the Pacific: Christ Church New Zealand, British Columbia and Hong Kong.

Moving out to the nave, at the highest level, seldom noticed by the congregation below, the series of narrow clerestory windows continue.  Those on the Diamond Head side begin with the seals of the dioceses of Jerusalem and Honolulu, and include those of dixteen dioceses in the Pacific area.  On the opposite side are seals of eighteen dioceses in the United States.  These windows portray vividly, not only the diversity and unity of the Anglican Communion, but also the support offered the Hawaiian Churchby its fellow members, for some of the windows were provided by the dioceses represented by their seals.