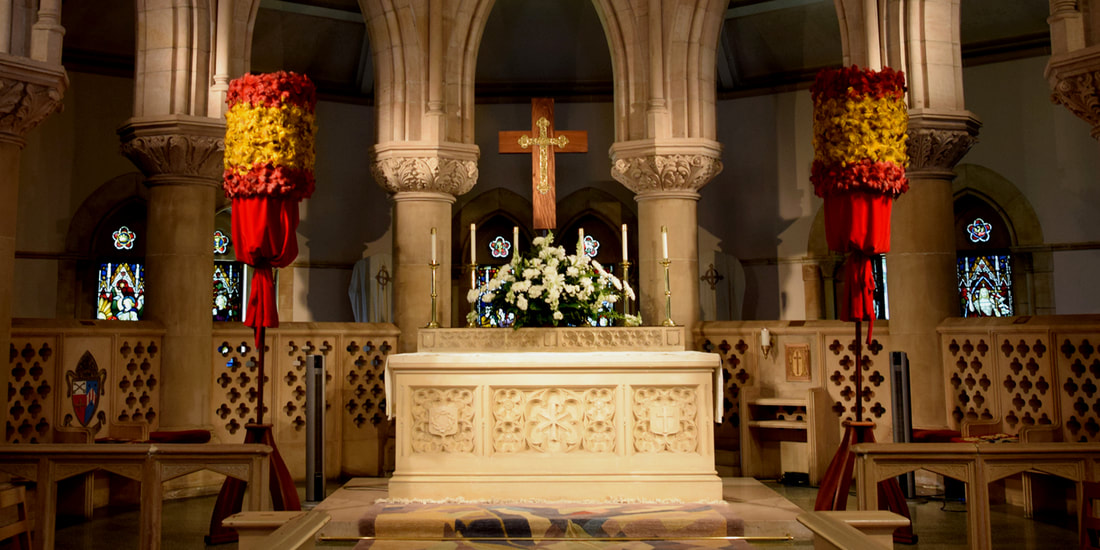 The High Altar was designed by Francis R. Allen and executed by Evans and Co., both Boston firms.  It cost $1,500, a sum which Mrs. Restarick (then Bishop's wife) solicited from members of the Cathedral congregation and her personal friends on the mainland.  It is constructed largely of Caen-stone, a soft pinkish, cream-colored limestone found near Caen in Normandy in the north of France.  Caen-stone was widely used in England during the period of great cathedral building, beginning in the 13th century.  Wesminster Abbey, Canterbury Cathedral and Old St. Paul's Cathedral in London were all built of Caen-stone, and the warm and attractive material was used for many altars, pulpits, lecterns, and baptismal fonts throughout Great Britain.  The High Altar was  dedicated on Ascension Day, 1908. 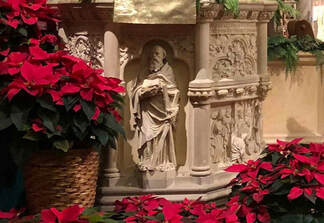 The pulpit to the left of the chancel, and the lectern to the right, are both carved of Caen-stone to match the font and the altar.  The pulpit was installed in 1913.  There is an interesting story about the design chosen for the pulpit which is a modified replica of the pulpit in St. John's American Church in Dresden, Germany, before it was destroyed during World War II.  Alice Brown von Holt Mackintosh was married twice, first to Hermann J. F. von Holt, Consul for Hanover, and then, after his early death, to the Rev. Alexander Mackintosh, Canon of the Cathedral.  While on a visit to her daughter, Mrs. Mackintosh worshiped at St. John's American Church where she admired the pulpit so much that she expressed the hope that a similar one could be placed in the Cathedral of St.  Andrew.  After Alice's sudden death in 1904, her son, Harry M. von Holt, resolved to carry out his mother's wish.  A sketch was made and a modified replica was carved by the same Boston firm, Evans and Company, which had also built the High Altar.  One important change was made.  In the central panel of the pulpit, St. Andrew, holding two staves in the shape of his cross replaced St. John of the Dresden model.  Also on the pulpit are carved the appropriate words: "She being dead yet speaketh."  ​