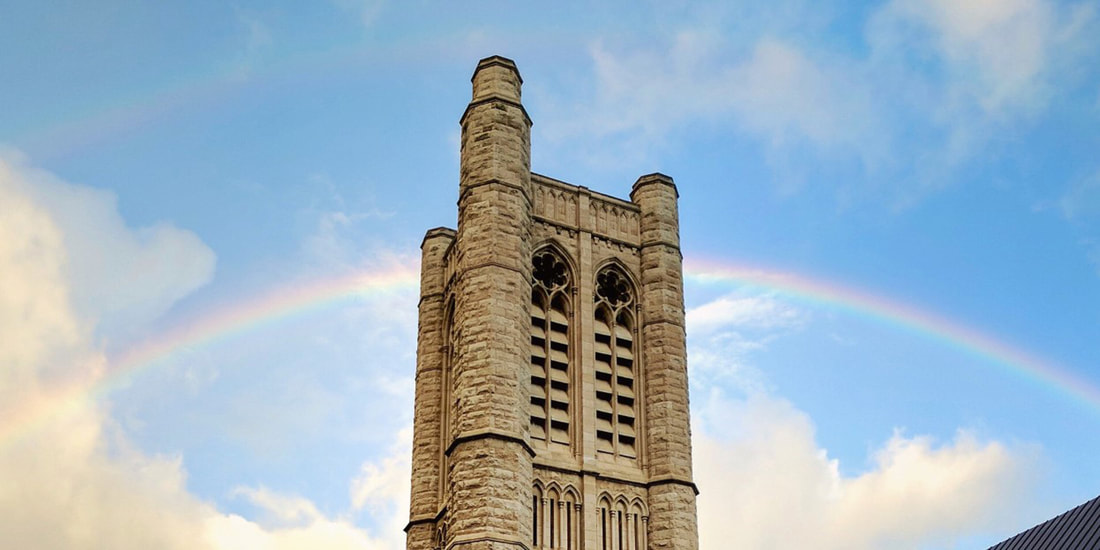 Mackintosh Tower, referred to as the Bell Tower, rises high above the other buildings in the close.  The tower was not in the original plans but was added in 1912 as a memorial to Alice Mackintosh, the beloved wife of Canon Alexander Macintosh.  As with Davies Hall and the unifying cloister, it was designed by B. F. Ingelow to insure harmony throughout the Cathedral complex.  The tower is composed of a spiral stone staircase with 50 steps leading to the room of the bell ringers and home to the St. Andrew's Ringing Society.

​In 1875 a 600 lb. bell made by Warner, a firm of bell-founders in England, arrived in Hawai‘i to be hung in the pro-Cathedral. When the bell was dedicated it was stated rather pointedly in the local press: May its summons be heeded by many who disregarded the old one.

When the Mackintosh Tower was completed in 1912, the bell was moved there and has been in service ever since. In 1991, a peal of eight bells was hung in the Tower. They were cast by John Briant, a well-known bell-founder and turret clockmaker in Hertford, England, who lived from 1749 to 1829. During his long working life of forty-five years Briant made 420 bells.

The new bells, which have been given to St. Andrew’s Cathedral by Laith Reynolds of Australia, came from St. Alkmund’s Church in Shrewsbury, England. In 1621, when St. Alkmund’s original three bells were melted down, John Clibury cast five bells; a treble bell was added in 1695. By 1811 the bells and the fittings were so worn that they were unsafe to use. They were taken down and this time John Briant cast eight bells from the molten metal. 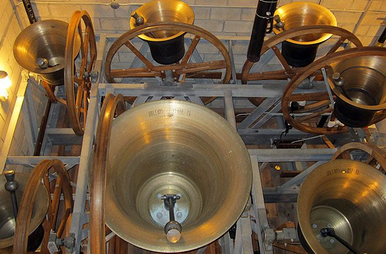 ​The new set of bells first sounded at St. Alkmund’s on Easter of 1812 and on Whitsunday the first peal of Oxford Treble Bob Major, consisting of 5,000 changes, was rung. Two years later the bells of St. Alkmund’s celebrated Wellington’s victory in Spain and, in 1815, his decisive triumph over Napoleon at Waterloo. Thereafter they rang out over the city and the England-Wales border country on momentous occasions such as coronations and royal visits to Shrewsbury.

The eight change-ringing bells of St. Andrew’s were the gift of Mr. Laith Reynolds of Sydney, Australia and Vancouver, Canada; their installation was the gift of HRH Abigail Kawananakoa. Installed in a tower seemingly built for them eighty years before their arrival, they are the most remote set of change ringing bells in the world and a point of pilgrimage for bell ringers the world over.  A cadre of dedicated ringers at St. Andrew’s, originally trained by ringers from around the world, maintains a schedule of ringing before 5:30 p.m. Sunday Service, as well as at celebratory services throughout the year. The Bell Ringers host ringers from around the world who generously assist with the ringing duties.

Bell ringing requires considerable concentration, skill, and durability to pull the ropes in the correct order over a protracted period of time. But bell-ringers, traditionally volunteers, are devoted to their avocation. The old ledgers at St. Alkmund’s, however, do contain frequent expenditures for “ale for ringers.” 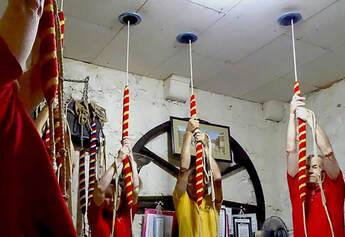 ​What does St. Andrews have that no one else in Hawaii has? In fact, that no other American church west of the Mississippi has? Change-ringing bells! And who does the ringing: a team of trained professionals? or a machine? No, a group of lay volunteers, people just like you. People who, a few years ago, had never heard of change-ringing. People who, like you, thought the ringing of the bells was a mighty but senseless tumble of sound. Now we’re the ones making that noise, and it makes a lot more sense to us. We love it, and we’d love it if you would join us and learn to do it too.

It takes a while to learn to ring these bells. You see, the smallest of the eight weighs about 600 pounds, and the biggest one weighs close to a ton. Each bell is rung by one person, pulling it by a rope. You don’t have to be that strong: some very clever seventeenth-century engineering to makes it relatively easy. If you ask us how it works we are liable to go on and on, because we find it so fascinating. But to make a long story short, we get our bell-behemoth balanced upside down. Then a firm pull on the rope swings it all the way around and, if the pull was just right, upside-down again on the other side. That’s one “bong.” That’s bell handling and anyone can learn it. Of course some learn it more easily than others. Kids learn best of all, though they have to be about 10 to be strong enough and heavy enough to do it. So come on up and try. Yes, up: 50 spiral stone steps up the bell tower.