The Church in Hawaiʻi

THE HISTORY OF THE CHURCH IN HAWAIʻI 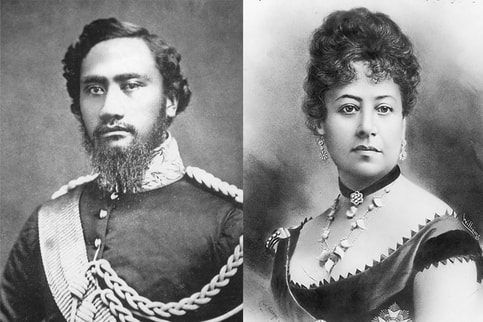 King Kamehameha IV and Queen Emma were responsible for bringing the Anglican Church to Hawaiʻi. This invitation culminated in the consecration of Thomas Nettleship Staley at Lambeth Palace on December 15, 1861 as Bishop of the Missionary Diocese of Honolulu. Initially the church was called the Hawaiian Reformed Catholic Church but the name would change in 1870 to the Anglican Church in Hawaiʻi.

The first services of the church were held on October 12, 1862, amidst a time of mourning for the young Prince of Hawaiʻi, the only son of the King and Queen who died shortly before the arrival of the Bishop. The arrival of the Bishop had been long anticipated and prepared for by the King, who had translated much of the Book of Common Prayer into the Hawaiian language and had written a Preface explaining this new Anglican Christianity to his people.

​The King and Queen gave land, part of their royal garden, on which the Cathedral was to be built. While planning and fund-raising began, a small Pro-Cathedral was constructed of wood; this would remain in use for more than twenty years, the time it would take for the first phase of the cathedral to reach completion. The untimely death of King Kamehameha IV on St. Andrew’s Day, November 30, 1863, led his brother, King Kamehameha V, to dedicate the cathedral to St. Andrew as a fitting memorial to a King.

​The first twenty years were a struggle for money, men, and materials, but with the aid of staunch supporters, the first phase of the Cathedral was completed in time for Christmas 1886, in great part because of the support for the Queen’s vision of the Cathedral as a memorial to her husband. Queen Emma did not live to worship in the Cathedral. She had died the previous year on St. Mark’s Day 1885.

The King and Queen dedicated their marriage to serving the health, educational, and spiritual needs of their people. To these ends they founded The Queen’s Hospital (now The Queen’s Medical Center), several schools, including The St. Andrew’s Priory School for Girls (now The St. Andrew’s Schools, with separate programs for boys and girls) and St. Alban’s School (now ‘Iolani School), and were instrumental in bringing the Anglican church to the islands to provide access to a form of Christian spirituality that the King felt was eminently suited to the character and temperament of his people. In recognition and commemoration of these deeds the Episcopal Church of the United States honors King Kamehameha IV and Queen Emma throughout the church on November 28, the anniversary of their Confirmation in 1862.

​Later in the royal succession, when King Kalakaua traveled, Princess Liliʻuokalani, who had been a friend of Queen Emma, would serve as Regent. Upon the death of the King, she became the last queen of the Hawaiian Kingdom (January 29, 1891). Queen Lili'uokalani, depended upon the spiritual support of the Episcopal Church during and following the overthrow of her reign in 1893. She famously was imprisoned in a palace bedroom where she composed songs that are still performed, still evoke memories.
​At Cathedral services, Liliʻuokalani always sat on the front pew. Sanford B. Dole, one of the conspirators in the overthrow of her government, sat on the opposite pew. Their reconciliation is one of the important stories of this Cathedral.

THE DIOCESE OF HAWAIʻI

​​The Missionary District of Honolulu originally included the Hawaiian Islands, as well as Guam, Okinawa, Taiwan and Kwajalein. It became the Diocese of Hawai'i in 1969 and now consists solely of the State of Hawai'i. Today, the Diocese consists of 37 worshiping communities on five islands.  About half of these are on the island of O'ahu, where Honolulu is located, while the others are distributed among Kaua'i, Maui, Moloka'i, and Hawai'i Island. Though small and rural, with miles of open spaces, we also reflect urban life with approximately 80% of Hawaii’s Episcopalians living in the metropolitan area of Honolulu.  As such, urban ministry is a major factor for many congregations. The metropolitan area Deanery consists of the churches on Cathedral Square, St. Elizabeth’s, and St. Luke’s, and St. Clement’s parishes.

Ministry in Hawai‘i is a special call.  Any location has its challenges but serving in Hawai‘i brings an additional set of advantages and tradeoffs that must be given serious consideration. We are on islands in the middle of the Pacific living in completely multicultural surroundings. Some congregations were founded to serve a particular ethnic group, but have since evolved to include a mix of people of, perhaps, Japanese, Korean, Chinese, Samoan, Hawaiian, Filipino, Mexican, and European descent.

​The Diocese is made up of people who are native to Hawai'i and from everywhere else in the world who worship according to the Book of Common Prayer, 1979. Even though we are Episcopalians, our friends and other members of our families may worship as Roman Catholics, in a variety of Protestant faiths, as well as Buddhists, Shintoists, Mormons, Jews, Hindus and in traditional Hawaiian and other native ways. We hold our cultural and religious variety in respect.

Worship in the Diocese fits the heritage, language and experience of the parishioners. Congregations in the Diocese have formed based on various ethnic groups, such as Hawaiian, Chinese, Filipino, Japanese and Korean. The Eucharist is celebrated regularly in Hawaiian, complete with Hawaiian language hymns. The Diocese celebrates annually, King Kamehameha IV and Queen Emma Day —the Feast of the Holy Sovereigns —on November 28.